This blog covers topics across the spectrum of security, privacy and compliance, as well as the people and issues driving enterprise infosec today.

Google maps integration looks cool, but in this tough global economy are software vendors going to spend the money needed to pursue offenders?

V.i. Laboratories, Inc., is adding Google maps to its CodeArmor Intelligence piracy threat software. Independent software vendors can use the company’s software by integrating it into the software release process. If the software is used without a license, a hidden software algorithm silently phones home, telling an ISV the location and possible business profile of the offender. It is a cloud-based service and uses Salesforce.com platform to provide a dashboard of reporting data, legal information and product management tools.

In May, a report from the Business Software Alliance (BSA) and research firm IDC found losses to piracy grew by 11% to $53 billion. Dollar losses from piracy in the United States total $9.1 billion, according to the report. Companies that pirate software deserve to be detected and held accountable, but this software appears to go one step further. Instead of treating offenders as criminals, it turns a piracy detection as a lead giving independent software vendors the ability to recover revenue on their own, through channel partners or seek legal action.

The software was first released in August 2008. While most software vendors incorporate a license activation key or some other form of registration to turn on all the features of the software, Vi Labs says it’s just not enough to keep people from using unlicensed versions.

“Currently, ISVs rely on licensing, activation or home-grown approaches to gather data, which are easily detected, bypassed or disabled by piracy groups. These home grown systems also lack filters, advance reporting processes, platform support, and are unable to organize and report the information in a way that can be used to develop a piracy lead.”

The Google maps integration is added through a reporting plug-in for the Salesforce.com platform. Users of the reporting application can look at the Google map (see below) and at a glance get a relative location of suspected software pirates. 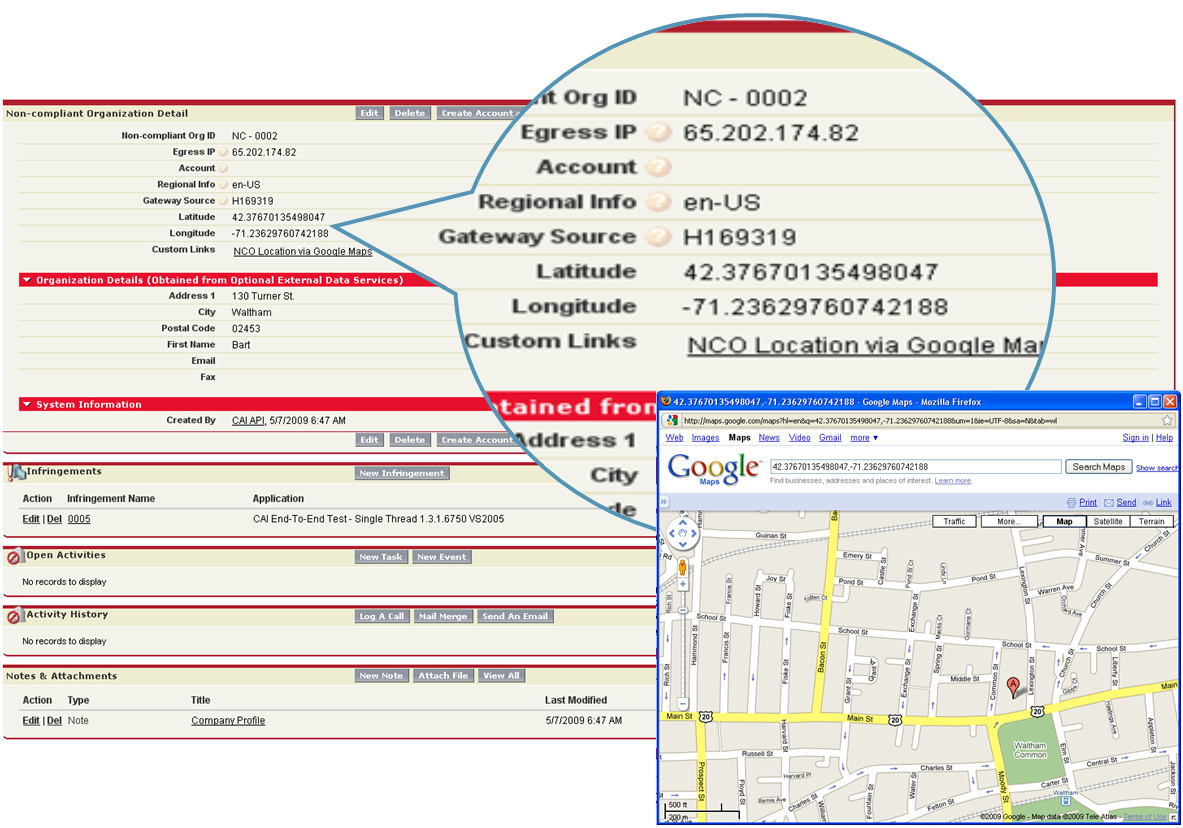 It is unclear how many small independent software vendors want to really march down this road. The software is not inexpensive at a minimum price of about $50,000, but if companies can detect pirates and reap lost revenue the investment should be made up. Of course, legal action itself is a cost factor, so the costs of going after software pirates could increase significantly if the offending company doesn’t cooperate. I suspect most firms treat software piracy as a write-off at the end of the day, to avoid legal costs.

In these tough economic times, struggling companies may be more inclined to use software without a license. But at the same time, how do you recoup lost license revenue from a struggling offender with no money?