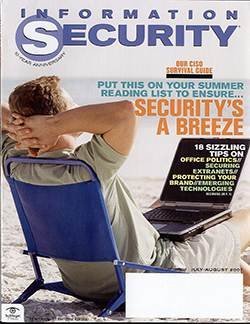 Hard Core Encryption software vendors can expect a challenge from the hardware front. Laptop encryption hasn't exactly taken the business world by storm, but that's starting to change. Performance issues and management headaches notwithstanding, the specter of one of those many lost or stolen laptops triggering the next VA debacle may be enough incentive for companies to take the plunge. Until now, the laptop encryption market has belonged to software vendors, such as SafeBoot, Utimaco Safeware, Credant Technologies, Pointsec Mobile Technologies (recently acquired by Check Point Software Technologies) and PGP, but that's changed with the release of Seagate Technology's Momentus 5400 FDE.2 full disk encryption hard drive. Seagate is the first hard drive manufacturer to release an encrypted drive; Hitachi has said it will also get into this market. Seagate is betting companies will embrace hardware-based encryption because of cost, performance and easier management. It estimates that its hardware encryption will save about $300 ...