Organizations are embracing virtual desktop infrastructure (VDI) with the expectation of persistent security enhancements and reduced desktop operating costs across the enterprise. This strong coupling between desktop security and IT operations  backs up the thinking among early VDI adopters that centrally controlled desktop configurations are more resistant to malware and keeping regulated data off of distributed physical desktops reduces the business risk of a data loss incident. However, realizing these security benefits requires more than simply recreating traditional security in a virtual world; it requires a practical approach to inevitable breaches of desktop security.

While defense-in-depth prevention is still critically important to the business, a VDI security-based approach favors active strategies for continuous malware resistance and compliance, data protection and incident response. These approaches are based on the following desktop security observations:

Security executives apply lessons learned from deploying virtual applications in the data center to solve desktop security problems and gain cost-saving efficiencies in continuous desktop compliance management. Improved security is consistently the primary business driver for VDI for most organizations, followed by ease of management, enable strategic cloud initiatives, and enhance remote access - especially via non-Windows devices such as tablets and smartphones. VDI not only saves significant operational expenses, increases resistance to advanced persistent threats, and removes obstacles towards increased use of the cloud, but it enables security executives to promote active desktop security strategies including:

Traditionally security executives focus on strategies for protecting desktops from malware and networks from intruders. The challenges today are to evolve the reactive device-centric approach with active strategies for protecting data and users. The opportunities to drive security benefits through desktop virtualization are compelling, including the sophisticated evolution of incident response strategies, data protection approaches, and streamlined maintenance of compliant desktops.

Security executives cannot control when or where malware will strike, but they can control endpoint software configurations to keep the infrastructure compliant with security policies and as resistant as possible to infection. This is reflected in many of the security performance metrics that organizations use to drive security operations, such as the time required to patch a critical vulnerability in a percentage of corporate desktops, the number of calls to the service desk due to non-compliant endpoints (including disabled security software), the rate of discovery for critical vulnerabilities, the number of PC refreshes (with loss of user productivity) necessary to recover from a malware incident, and the total cost of security per desktop. However, it is becoming increasingly difficult in a physical desktop environment for security to improve on these performance metrics since desktops can be powered down or disconnected from the network – there will always be endpoints that remain un-patched or desktop applications that have not been upgraded. The chart, based on Qualys’ Laws of Vulnerabilities in 2010, illustrates how long it takes to even approach 100 percentcoverage of a critical software patch. In fact, 100 percent completion is often unattainable as there are desktops unavailable for extended periods of time. 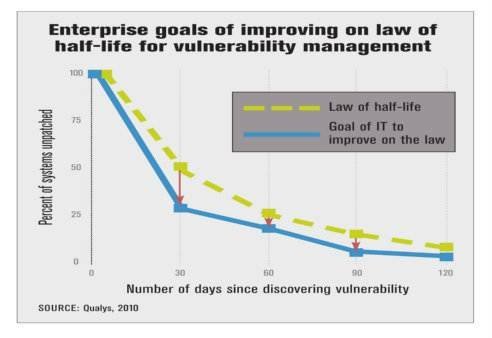 A strategy toward a malware-resistant compliant infrastructure relies upon virtual desktops to simplify desktop management, reducing the risk of security incidents and returning operating costs to the business. VDI has the attractive properties of creating virtual desktops from centralized images where it is easier for security operations to maintain compliant desktop configurations and to ensure that users operate under the most recent versions of authorized software. The ability to provision new desktops from pristine images, and to automatically re-provision desktops when users logout gives security executives the chance to evolve towards the next generation infrastructure.

The operational cost savings of a virtual desktop infrastructure can be significant. For example, Ogren Group research finds that it is not uncommon for roughly one percent of corporate desktops to require service each month from normal operations. Reducing that percentage, and reducing the costs of a desktop refresh, with a continuous desktop management strategy based on VDI  promises to sharply reduce this operating expense and increase user productivity. Security teams are hitting the limits of improving key security performance metrics with physical infrastructures where each distributed desktop needs to be accessible. The next generation approach that is based on VDI promises to reduce the burdens of securing endpoints and delivering a compliant desktop infrastructure to the business.

Modern attackers are much more interested in avoiding discovery and stealing intellectual property than they are in damaging infected desktops. Security executives are responding to this trend by prioritizing data protection strategies along with creating a cost effective automated desktop management infrastructure and an active incident response strategy.  Virtual desktops allow security teams to more tightly control regulated data, and to respond to security incidents with actions including:

The costs of compliance reporting are greatly driven by the number of security products that must be checked – the more software products the more time must be taken. Using virtual desktops to reduce the number of individual agents is reducing the cost of security, while protecting critical corporate information.

Unfortunately, it is not enough to operate a continuously compliant infrastructure that offers enhanced security with reduced operating costs. Attacks will still infect browsers and applications in virtual desktops just as they exploited vulnerabilities in physical desktops. Being virtualized does not change that. However, with VDI security executives can establish a pragmatic incident response strategy that expedites mitigation actions, is less disruptive to the users, and keeps the business running. Again, the keys are the ability of VDI to automate the provisioning and termination of virtual desktops with capabilities such as:

Finding an effective incident response strategy to minimize disrupting user productivity has bedeviled the security industry – vendors and enterprises since the inception of ‘scan and hope’ antivirus software. The traditional approach of refreshing an infected desktop is time consuming and costly. An active and pragmatic incident response strategy automates the termination and re-construction of desktop VMs, flushes malware before it can spread, and gives security teams the flexibility to leverage off-premise services for disaster recovery.

Organizations are leveraging virtual desktop infrastructure to enhance security, reduce operating costs, and pave the way for cloud-based computing.  Security executives were tasked with protecting the business even while VDI security was poorly understood. However, security executives are now turning to VDI security to drive the costs out of desktop management and improve corporate resilience against attacks. They are using the powers of virtualization to evolve towards a continuously compliant desktop management infrastructure, establish a rational and active incident response plan, and elevate the priority of protecting important information. Virtualization has been a game-changer in the data center and the time is rapidly emerging where virtualization will also be a game-changer for desktop security.

Eric Ogren is founder and principal analyst of the Ogren Group, which provides industry analyst services for vendors focusing on virtualization and security. Send comments on this article to [email protected]